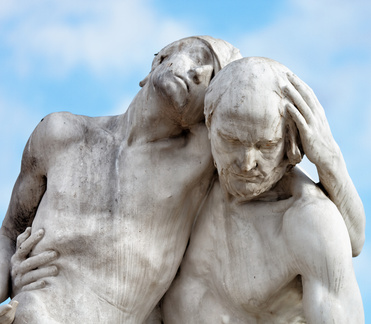 So here we are. And art matters even less, doesn’t it?

If only all the artists had gone to med school instead, we’d have enough doctors to go around.

We have enough, though, don’t we? Unless we had a 3-year-long bout of dysentery—hitting both TP-factory workers and the general public—that I don’t know about, we have enough.

But some of you have more than enough, don’t you. And you’re likely the ones bemoaning the lack of real, useful professionals and the glut of useless artists like me, seemingly above the fray, judging.

But no one is above the fray now, are they?

And I know you know we’ve had at least 3+ years of “oral dysentery” via the political arena, haven’t we?

All the while, art and The Word stare you down, shaking their heads, saying, “Et tu, Brute? Et tu?”

Going back even farther than those famous words—uttered by Julius Caesar in Act III of Shakespeare’s eponymous play—while the former slaves of Egypt danced and hedonized before a graven image of a golden calf, Moses came down from Mount Sinai with words—words, written and set in stone by the finger of the Almighty himself.

How easily Moses lost his temper in righteous indignation, thus breaking the stone tablets. He rebuked those he freed from bondage and slavery with a slew of stuttered words, likely, encompassing a single theme: “After everything you’ve been given…et tu, Israel, et tu?”

We’ve all heard the story and that’s how it goes, isn’t it?

And we’ve also heard the axiom “written in stone.” But that phrase is almost always used with a negative adjective-qualifier, “nothing” or “it’s not…”

“Nothing is written/set in stone.”

In other words, despite the fact God himself used stone tablets as his own touch-pad and carved out the words “Thou Shalt” and some variants, 10 times, it doesn’t matter. The literal hard copy of those commandments was broken by Moses, ostensibly God’s chosen prophet, who frankly sounds like a stuttering killjoy with an olive branch up his ass.

I mean, he told everyone he’d BRB, went missing for 40 days, 40 nights, and they began sinning before they even knew they were sinning.

Wait, what? What does that mean, “…before they knew they were sinning”?

Well,  they weren’t worshipping an actual calf. They’d taken their most valuable, costly metal—all their gold—and as a community, melted it down to worship, give thanks, perhaps, to the god, El, who encompassed all Gods. Back at that time, a cow or calf was the symbol of El, the King of Kings, the God to the “I Am that I Am that I Am” power (God I Am). Linguistically, the plural form of El, meaning “gods,” is ʾilhm, equivalent to Hebrew ʾelōhîm.

So… the whole “I Am God” and “Thou shalt have no others before me” thing?

Yeah, Yahweh was writing that on the tablets up top on the mount while the Israelites were down in the desert doing a community “thanks” to the physical representation of the god who saved them.

Now, I’m guessing stone memos were still pretty heavy, and since Moses was up there alone, I’m pretty sure no one got one stating “Hey, ix-nay on the olden-gay alf-kay worship!”

An alternate narrative is that Moses was the one who broke Yahweh’s commandments, quite literally, and broke the letter of the law, while the Israelites kept the spirit of the law, by giving thanks.

History is not written in stone. It’s written in blood. Blood of innocents, blood of the guilty, and we all fall somewhere in between, and if you don’t think that’s true, I have an ornate ark of sand I want to sell you. But this is not the world’s first pandemic. Not the first plague.

It was called The Black Death and it decimated the population of Europe anywhere from 45-80%, depending on the region. It was so horrifying because it killed indiscriminately.

Much like the Corona virus, the Black Plague was highly infectious, and easily transmitted. It came from China—but no one called it the “Chinese virus.”

While it originated there,  the demand for goods from China was as high then as it is now. The goods were brought along the Silk Road, then by Genoese merchant ships, and the Black Plague spread throughout Europe and beyond and yes, while from China, it was our demand, your demand, their demand for products “Made in China,” just like your cool new bucketful of crap you got in Prime 2-day shipping from Amazon, that facilitated the pandemic.

But the at-risk populations of the past are the very same at-risk populations today: those with means didn’t die as readily as the poor. Back then, those without means were already suffering from underlying health conditions, not the least of which was malnutrition. Those not in good health usually had no way to pay for wellness and were older in physical health due to hard day-in, day-out labor and like the Corona virus, it afflicted the elderly more than the young.

In other words, the poor died more than the rich.

But back in those days they had no idea how epidemiology worked. They had no idea what a virus or bacteria even looked like. In other words, they’re excused their ignorance. What’s our excuse.

There was a time, historically, when certain human lives were worth more than others. An ugly blot on human history and American history.

What will the story be when future generations read what we know, what we knew, and how we once again decided that some lives count more than others.

And while information is now at our disposal—dynamic, always changing and updating, “what we knew then” is a different ballgame when we have technology imprinting, in stone, as if by the Google God itself, what we knew just 12 hours ago instead of thousands of years later as they dig up our bones.

How the rich, no matter their color, gender, creed, race or politics, assures they thrive on the backs of those simply trying to survive.

This is a human issue. It isn’t a political issue but it is, isn’t it? Now, it is. And we have been betrayed.

When Caesar’s most-trusted advisers betrayed him, freeing Rome from “tyranny,” it was only seeing his most-trusted friend, Brutus, that caused the emperor the most suffering, saying as he died, “Et tu, Brute?”

Brutus, the man Caesar trusted most. The man he’d been so generous to and with. The man he loved as a brother, a son. The betrayal runs deeper than anything before or since, because as we use those words, as we talk about nothing being set in stone, we are talking about breaking The Word because we assume we speak for God, we assume we’re chosen, and those who believe this are at the heart of all tyranny.

“…to honor, cherish, I swear to fulfill… give us your poor… I swear to serve the office of…”

History has a way of revealing the story that aligns most readily with the truth as time goes on. And artists and writers have a solemn responsibility to write from truth because while we write stories, the alternate narrative is how we gain the whole truth and serving the public good is not always in line with the newest fashionable activist trends.

I have been held hostage for too long by the tyranny of politics. I don’t speak for you, those who hold your social carte blanche as filters over your mouths and shields over your ears, giving you the kind of privilege people in other parts of the world only dream about.

I am not called by the gods as some chosen one. Artists and writers are not saviors. We are not blessed with the gift of words. We are cursed with feeling too much and seeing the whole of history in the present moment.

Anyone can hear them—the ghosts of the past as they rage, weep, cry out injustices, but most choose to ignore them.  It’s my belief that writers and poets don’t have that choice. It’s the definition of madness.

Seeing and feeling the story of the whole of humanity, and only having one life and one voice to attempt to tell it.

And while the world huddles together in fear around their toilet paper cases, remember one thing and remember it well: somewhere along the line, you made an oath, a vow, to take care of your human family. If you’ve ever, in your life, uttered the words, “I am blessed,” understand—blessings are from God, the God, The I Am that I Am of old, and he is a jealous SOB, and I’m guessing more judgmental than me. Less patient.

You were not “blessed” so you would have enough. You were blessed so the least of these, your brethren would have what they need.

If it takes a poet to remind you of that, so be it.

As always, je te vois—which means, incidentally, I see you—