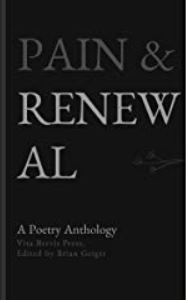 Pleased to announce the release of the new anthology out of Vita Brevis Press, courtesy of editor, Brian Geiger. The anthology, "Pain & Renewal," explores just that: the cycle, circle, that goes 'round and 'round, all our lives. I appreciate Brian's insight. He didn't try to even the score with "this many" for poetry about… END_OF_DOCUMENT_TOKEN_TO_BE_REPLACED

Good morning and welcome to another edition of Writing in Blood's deconstruction of a wonderful haiku by poet, Christopher Perry. Another Haiku contest, courtesy of Vita Brevis, brings us Christopher's haiku: On Autumn Dry leaves falling Silently on sunlit church Tears cleanse the path home *** The title of a poem is as vital to… END_OF_DOCUMENT_TOKEN_TO_BE_REPLACED

This is my first post on my new WordPress writing blog, and how fitting it’s a contest from one of my new favorite literary magazines, Vita Brevis.

On this blog, I’ll be deconstructing other writers’ works, and writing about the writing process, from my perspective and experience.

So today, in the comment thread, as per the guidelines, there was a haiku that had me shuddering and examining it all morning. It’s written by a poet–her blog address below–named Monika Kapur, I believe (please correct me if I’m wrong) and I found it both beautifully haunting and powerful, which is rare in a 17-on haiku, at least from my experience.

Usually, the juxtaposition of the kiru, the cutting word, is more subtle. And from my experience with traditional haiku, “subtle” is usually the tenor and spirit of the form and composition. Rarely do poets capture “power” within a nature-themed haiku, since it’s typically used to capture a fleeting moment, filled with conflict, then represented by the natural world surrounding the poet’s imagery. Here is the link to her blog:

Her poem can be found HERE, my comments, below.

Good luck to you, Monika! I hope your poem is given the attention and merit it deserves.

This is excellent. The kiru is at the end of the first line–falling, (v); fall, (the season), but the power of the first two words is no less “cutting.” The first word, “Lazy” juxtaposed with “awakens;” the second, “leaves,” a homograph, can easily be seen/read as a noun or verb, signaling the departure of summer.

Then the wind, “sings a lullaby…” is it just me, or does the word “lull-a-by(e)” seem rich with connotation and conflict? “To lull,” means to calm, but also has a slightly diabolical meaning, which, when used in context, also means to induce a false sense of security, and an impending abuse of trust. Maybe that’s why old fairy tales and many lullabies seem slightly frightening: (“…when the bough breaks/the cradle will fall/ then DOWN WILL COME BABY…”!?) That’s terrifying! Yet we sing this, and other songs, a “lullaby” to our children without really considering what the words mean. Sorry, digression.

So, Monika’s “lazy leaves” are sung to complacency by the breath of Mother Earth, and the tree releases its hold on the leaf, which has become useless to her—a drain on her, in fact—so for her own survival, the leaves must “leave;” depart, fall, so the tired mother tree can rest. Autumn is then awakened, almost like a sleeping Goddess of Destruction and Death: the impartial Mother Earth, Gaia, who understands that to everything, there is a season (turn, turn, turn, nod to The Birds ;)).

So…on first glance, yes, this poem seems so “sweet” and filled with wa, or heiwa (harmony, peace) but in fact, like the “Rock-a-Bye Baby” lullaby, it portends a certain violence from “the Great Mother,” the Earth, the world. And if we anthropomorphize Mother Earth, on which every, living thing relies for their very survival, she is not unlike human mothers to the infant, whose mother is literally this all-powerful being–she is the infant’s whole world.

Autumn is both the goddess’s emissary and intercessor before winter. Winter, her executioner, who destroys her creations—those who are too weak to survive.

And when Autumn is awakened, she decides who will live, who will die, as her breath sings through the air, chilled and as sharp as shears. Her lullaby is not simply a “killing,” but a warning to those who must hide, hibernate, ready themselves; if not, they are killed, then buried in the dreary, frozen tomb of snow. Like the leaves, which have grown, become useless and complacent as they hang onto their mother-tree, whose bough has dried, and stopped giving her children nourishment.

So the wind rocks them, lulls them to sleep, so the mother-tree can finally release her hold, whereby they “fall” to their deaths: skins depleted of verdant life, which ebbed out like an exsanguination—all color drained, aged into gold, then brown, to be reincorporated into the dark blackness of the burial-dirt of Earth–the TREE’S mother. Just as we are buried when we die, all vitality drained from us, our “wind” knocked clean out of us, then we’re returned–to the Mother of All—the Earth’s, embrace.

Yes, the kiri, the “cutting word” of this piece is the most foreboding with the use of the word “awakens.” The Goddess of death awakens…and down fall the leaves, “…cradle and all.”

I don’t know that I could do much better than this. I will share this fun little contest on my blog, though, but this haiku, from where I sit, is an exceptional, fantastic piece. Brava!

Vita Brevis is hosting a four-day haiku competition–taking place entirely in the comment section of this post!

Here’s What You Need to Know:

3. (Optional) Give good feedback on other commenters’ work!

Reward: We’ll publish the winning poet, featuring their haiku on the front page of our online magazine with a link to their blog.

Questions: Use our Contact Us page–I’ll get back to you soon!

I’ll try to respond to as many of you as I can–get writing and have fun!